"Man, what the hell was I thinking when I agreed to this?"

Conquistador is a character appearing in The Darkness comic series.

Conquistador searched for the Fountain of Youth for many years before eventually finding it. There Cherub Hostile gave him a deal, if he becomes their host, Conquistador will become immortal. Conquistador accepted this offer and became their host and pawn. Cherubs reveal that their mission is to bring a new eden to Earth by sending all human souls into purgatory.

In Search of Sacred Weapon Edit

His search for this weapon led him to a souvenir shop owned by Jebediah "Jed" Honksten. After Cherubs kill the owner of the shop they begin to dig under it in search of the weapon. Conquistador watches as Cherub Hostile dig through the souvenir shop. When they're finished, he jumps into the hole, but not before expressing remorse over the death of Jebediah Honkstein.

Conquistador and Cherub Hostile find the weapon that can return every living soul on Earth to purgatory. Conquistador urges the cherubim to purge the Earth from humanity while regretting his decision to give his soul for the immortality.

Clash with The Darkness Edit

As sunrise came, Cherub Hostile led by Conquistador attacked the beach where, Jackie Estacado, Jenny Romano, Robert Bearclaw and Capris Castiglione were staying. Jackie then summoned the Army of Darklings which slaughter all the Cherubs and kill Conquistador by decapitating his death and mounting it on a wooden spike.

Conquistador deeply regretted for the rest of his life for agreeing to become a host for Cherub Hostile in return of immortality. Although, he wanted to stop the Cherubs from accomplishing their goal, Conquistador knew that he couldn't do anything because he was just pawn to them. When Jebediah Honksten was killed by Cherubs, Conquistador expressed remorse over his death, but believed that he was lucky compared to what the rest of world would look like after Cherub Hostile is finished with it. 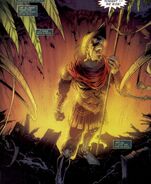 Conquistador killed.
Add a photo to this gallery
Retrieved from "https://thedarkness.fandom.com/wiki/Conquistador?oldid=17721"
Community content is available under CC-BY-SA unless otherwise noted.