"When his throat heals, when he can speak - that is when the interrogation will begin in earnest. That is when your tio Sampayo will earn his keep!"

– Colonel Sampayo telling what he will do with Jackie to the children. [src]

Colonel Sampayo is one of the Sierra Muñoz resistance leaders appearing in The Darkness comic series.

Sampayo served as a colonel in the Sierra Muñoz army and later resistance. After Jackie Estacado and Professor Kirchner come to the country, they hired him as their head of security. Together with Marisol Yanez, Sampayo planned an assassination attempt on Jackie. Before the attack, Sampayo leaves Jackie's mansion.

After the failed assassination attempt, Jackie with the help of his Darklings, tracked down Sampayo to a remote compound. The Darklings quickly kill all the armed men and retrieve Sampayo. Realizing that Jackie has been drugging his people, Sampayo decided to betray him. Jackie then asks the location of Marisol, but Sampayo refuses to betray her. He then decides to take Sampayo back to the mansion for interrogation. As they get closer to the mansion they see it to be attacked by Apache helicopters. Sampayo then reveals that they have sold out to the Americans in order to take Jackie down.

After Jackie is betrayed by Kirchner, the resistance capture and imprison him. Sampayo brings children so they could see their defeated tyrant. Eventually, Marisol comes and tells Sampayo to take the children away. She then inspects Jackie's injuries. Jackie, free from The Darkness is overwhelmed by the beauty of the world around him. Seeing Marisol's face, causes Jackie to cry. He's says that Marisol is beautiful and for this she slaps him. She then proceeds to inject Jackie with the addictive version of Nightfall that was spread around the country by Kirchner. Marisol intends Jackie to make an addict so they interrogate him.

After Jackie regains his senses, Sampayo prepares to shoot him. Estacado reveals that he can't undone the damage the Nightfall has done if he gets to the cathedral where the drug is made. Sampayo doesn't believe him, thinking that Jackie will lead them to a trap, while Marisol sees him useful enough to keep him alive. They then travel to the Cathedral with Sampayo staying behind. Sampayo isn't seen afterwards from this point on, but Miguel states that the Colonels troops took over Brecca and put a bounty on Jackie.

Sampayo was a ruthless man, which served the tyrants that rule his country. This all changes when Jackie Estacado becomes the new Ocaso. After seeing what Nightfall does to the people of Sierra Muñoz, Sampayo grew conscious and decides to join the resistance in order to take down Jackie. He even willingly risks his life when he refuses tell Marisol's location.

Colonel Sampayo and Jackie watching the attack on the mansion 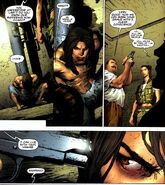 Colonel Sampayo preparing to kill Jackie
Add a photo to this gallery
Retrieved from "https://thedarkness.fandom.com/wiki/Colonel_Sampayo?oldid=14746"
Community content is available under CC-BY-SA unless otherwise noted.