Navitor Chiles was the navigator of an exploratory spaceskrift. When she picks up a distress signal coming from destroyed Earth, she and her crew find themselves at the mercy of the Darkness.

During their voyage, Chiles picks up a distress signal from destroyed Earth. This forces her to call her commandatrix, Leeleeroq to the bridge. Leaving the line still open, rightguard Festest expresses his distrust in their commander. Chiles silents him immediately, telling that Leeleeroq is their commanding officer and she deserves their respect and loyalty. The lionfish alien tells that Chiles was supposed to be the commander of their mission, while another ponders that this is all related to politics. Porter then agrees to Chiles, telling the crew that they sworn to serve the Halcyon and if they believed Leeleeroq was battle ready it is not their place to question them, no matter how suspect they're of her wisdom.

When Leeleeroq comes to the Bridge, Chiles informs the captain, that they received a distress signal from a quarantined quadrant. Leeleeroq gets frustrated, that her navitor, woke her up in the middle of the night for a standard operating procedure like this one. Chiles then quickly explains, that this isn't a normal distress signal as it came from Earth. The entire crew is shocked to hear this revelation as Earth and everyone on it has been dead for the past twenty years.

Chiles notes, that the denizens of Earth weren't the nicest of people, but Leeleeroq tells her to keep her xenophobic comments to herself. Leeleeroq adds, that no ones knows exactly what happened in the final days of their second millennium that caused the genocide of an entire planet. She also points out, that the Galactic Halcyon's ignorance of humanities fate is a stain upon the entire omniverse. Chiles then says, that if the signal is real, Earth maybe perhaps not as dead as conventional wisdom would indicate. The commander then tells Chile to put the signal on screen.

The Mission of USS Envoy Edit

As the distress signal begins to play, a man can be seen, requesting immediate assistance and begging God to forgive him for what he has done. The navitor then notices that the signal is carrying an attachment and Leeleeroq tells her to immediately download it. Porter quickly brings the commandatrix to the fact, that the procedure dictates they should land and offer assistance to any survivors, but Leeleeroq decides to first check the content of the attachment before doing anything rash. The attachment is a holoscopic simulacrum of the USS Envoy log entries of its ten year mission.

In the year 1999, the crew of United States Space shuttle Envoy lifted off from Cape Hope, Florida. Their goal was to study atmospheric conditions of Saturn - the neighboring giant with the ability to annually repair its own ozone layer. For the people of the Earth were now confronted with the reality of extinction. Leading the crew was Lt. Colonel Samson Cord. A co-pilot on nearly a dozen other space flights, this was his first assignment as space crew commander. The instigator of the flight, Ted Hyatt, a brilliant cryogenicist, whose hypothesis started the last ditch effort to save Earth from itself. Nora Case, the shuttle's only engineer and the builder of the Envoy shuttle. Andy Cohen, a practical scientist, whose mission was to make Ted's theory into reality. And finally, Bud Starling as the co-pilot of the Envoy.

Despite all the odds, after ten years of researching, the Envoy was successful with their mission and managed to unlock the secret of atmospheric restoration. As they get closer to home, they're shocked to see Earth destroyed. Overwhelmed with grief and anger, the crew of Envoy begin to ponder their next step. Suddenly, the shuttle is swallowed by the darkness. Starling questions as to what happened, but no one answers, as if all the crew when faced with the unexplainable event, tried to convince themselves that nothing has happened. Hyatt then informs the crew, that they're landing, leaving Case clueless as to how is that possible.

Then, the Envoy caught death grip of a tractor beam of some sort. Cord is confused to see an intact building, right in front of them. The sign on the front of the building said "Geodesic Bio-Sphere, Los Alamos, California". After much debate, Cord was the first member of the crew to venture forth, knowing fully that this was a trap. Once Cord navigated the airlock, he bade the others to join him. Everyone except Hyatt, joins Cord, deciding to stay in the shuttle in case they need to make a quick getaway.

Inside the bio-sphere, the four astronauts find a tropical paradise, although its completely empty of any sentient life. Undaunted, Case begins taking water samples. With each new reading, each new finding, it was becoming clearer that every aspect of this manufactured environment was almost too perfect. Standing together a moment, Cord asked Starling for his opinion on what was happening. Starling gets philosophical, telling Cord that in space you need to accept that there are just some things a body's got no control over.

After hearing his words, Cord didn't feel particularly inspired. He then tells Cohen to check in with Hyatt, in case this Heaven turns out to be living Hell. Cohen contacts Hyatt, asking if he's still there. Hyatt confirms he's still in the shuttle and cracks a joke. As the call ends, its revealed that Hyatt is dead with a Darkling holding his decapitated head and mimicking his voice, as his pals rip apart the shuttle.

Seeing this, Leeleeroq orders Chile to freeze the frame. She then asks her crew if anyone knows what kind of creature they're seeing. With her crew having no clue either, Leeleeroq tells computriat to cross reference every known sentient species in the omniverse. The computriat comes to the conclusion, that the creatures in the picture, belong to the entity known as the Darkness. Leeleeroq is shocked to hear this, as she thought that the Darkness was just a fairy tale meant to frighten little children into behaving at bed time. She then orders to bring up all the information the computriat has about the Darkness. The computriat reveals the history about the Trinity: Angelus, Witchblade and the Darkness, and its last host, Jackie Estacado. It then adds, that whatever happened to destroy Earth was nuclear in nature and Jackie Estacado was among to be killed in the calamity. The bad news is that without a host body, the Darkness is no doubt searching for a new one.

Leeleeroq, comes to conclusion as to where the Darkness came searching for its new host and tells navitor to continue the recording. Cohen then comes across naked Case, preparing to have a bath in the lake. She then seduces him into having sex with her as the Darklings watch from the bushes at arm's length away. Cord then hears a scream and proceeds to dash into their direction with Starling joining him soon after. As they searched along the lake's waterfront, they found "BOO" on the sand, spelled out of human bones.

Before Cord can tell if the bones belong to Cohen or Case, he notices a swirl of blood making its way up from the bottom of the lake. Starling tries to stop Cord, but the commanding officer doesn't listen and throws himself into the water. When he reaches the bottom of the lake, Cord finds dead Case, tied up to a cross. By the time he came back to the surface, Cord had already figured it out, that he was the only left alive and who was responsible for his crew deaths. As he turns to Starling, which know sported Darkness armor and was surrounded by Darklings, Cord asks him as to why he did all of this. Starling doesn't answer and sends his Darkling down his throat, killing him in the process.

Attack of The Darkness Edit

Back inside the vessel, the Darkness suddenly addresses Leeleeroq, asking if he can call her Leelee for short. Realizing what's happening, Leeleeroq tells naviport to end the transmission, but its too late. The Darkness then takes control of Chiles and Porter. He tells Leeleeroq, that it made a mistake when choosing Starling as his host, because he was weak. The Estacado's were strong stock, needing twenty one years of incubation before they can become the vessels of the Darkness. But by downloading himself into ship's computriat during this communication, he was able to share himself between her's helmspeople.

With Earth gone and the Darkness now inside the ship, there's no where he cannot travel. Leeleeroq then quickly reroutes the navigation controls to her chair. She then kills both Chiles and Porter as the Darklings surround her and her crew.

Differently from most of her crew mates, Chiles expressed trust and loyalty in her commandantrix, Leeleeroq. According to comments made by Lionfish Alien, before Halcyon assigning Leeleeroq as commandantix, Chiles was considered for this position, implying that she possess skills needed to be a commander of a space vessel.

Chiles and her crew, investigating the distress signal from Earth. 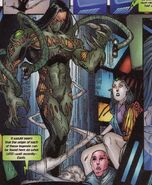 Chiles and Leeleeroq learning about the Darkness.

Chiles possessed by the Darkness.

Leeleeroq killing Darkness possessed Chiles.
Add a photo to this gallery
Retrieved from "https://thedarkness.fandom.com/wiki/Chiles?oldid=19073"
Community content is available under CC-BY-SA unless otherwise noted.