"How do you sleep at night with the Darklings surrounding your bed - ain't you scared? I would be."

Carter is a character appearing The Darkness comic series.

Carter was born to Kamala Dawson Lopez and Jarlos Alverez. Kamala then took Carter with herself and escaped from Jarlos in order to shield her son from his influence. When Carter became older, Darklings started to come at night and speak with him.

Carter met with Jackie Estacado when the latter came to Miami. During their first meeting, he reveals that he knows about Jackie's Darklings, much to Jackie's confusion. Suddenly, airport security check luggage for drugs when unknown gunmen open fire on them. While they are distracted, the gunmen kidnap Carter and bring him to Jarlos private island off the shores of Miami.

Jackie eventually comes to the island in search of the boy. After some persuasion from Jackie, Slay lets him to see Carter one last time before he kills him. He brings Carter who is happy to see Jackie and reveals that Darklings talk to him every night. He asks Jackie if he will make them stop to, which he answers to Carter that he will.

Jackie tells Slay that they're leaving and jumps off the rig into the water. Slay quickly sends his men after him as Jackie swims deeper trying to reach the dark ocean floor. As Jackie reaches the darkness, he activates his powers and kills Slay henchmen.

Back on the oil rig, Slay question as to where did Jackie disappear when suddenly the oil rig begins to tremble. Under the water, Jackie sends his Darklings to eat through the supporting beam holding the rig afloat. As they break through the supporting beam, rig sinks, killing everyone on it except for Slay. As Slay begins to sink, Jackie leaves him to the mercy of the Darklings. As Jackie and Carter get on a boat, Jackie asks him to tell what Darklings told him every night.

Carter is quite witty and bubbly. He seemed to have get used to the Darklings to an extent where he wasn't afraid of them. Although he does as Jackie to make them stop coming to them, showing that he just hiding his fear from them. Carter believed Jackie to be a good man, even though Darklings told all the crimes he committed.

When he was kidnapped, Carter expressed to dislike being in the presence of his father.

Carter as a newborn. 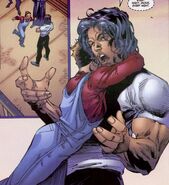 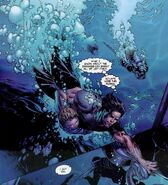 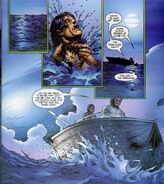 Carter surrounded by Darklings on the cover of Vol. 1 Issue 29.
Add a photo to this gallery
Retrieved from "https://thedarkness.fandom.com/wiki/Carter?oldid=17701"
Community content is available under CC-BY-SA unless otherwise noted.