"I'll be the princess who slayed the Darkness. And all it cost... was everything."

– Carla reflecting on her revenge. [src]

Agent Carla Denton was part of the FBI's anti-terrorist division. Originally an idealistic young woman, Carla's world was shattered when her fiancé - Todd Cabarello - was assassinated by Jackie Estacado while working as an undercover informant within New York City's mob families.

Born Carla Louse Denton, Carla went to Quantico, Virginia to undergo training for federal agency. There she fell in love with Todd Cabarello. They both managed to graduate together, with Carla going on to specialize in international terrorism while Todd became an undercover mole.

Broken by her fiancee's death, Carla isolates herself from the outside world as she mourns Todd. Eventually she is contacted by Gleckman from the Washington office who reveals to have information on Todd's killer. Gleckman reveals that Thomas Marchianni was killed for secretly stealing money from Frankie. Frankie at first thought that it was Todd who was stealing from him and ordered Jackie Estacado to kill the agent.

With the identity of her fiancee's killer, Carla begins to gather information on Jackie and the people he cares, including Butcher Joyce and Jenny Romano. Eventually these search leads her to India, where she meets with an ancient man, known as The Nameless One. The Nameless One reveals that Jackie is the host of The Darkness an agent of chaos. No human can kill it, but a race known as Necrobi who feed on sexual energy of human and become stronger every time they do it, could end The Darkness.

Carla manages to track down one Necrobi named Walter Cullowski, who was being held in an asylum. She kills the guards and breaks him out. Carla then offer herself to become his sex slave if he kills Jackie Estacado. Walter agrees and Carla feeds him enough sexual energy so he could become strong enough to kill Jackie.

Carla with help of Walter then kidnap both Jackie and Sara Pezzini. She then begins to torture Jackie, but fails to break his will. Walter then enlists the help of Sara, saying that he will release many humans that Necrobi have captive. As Sara too fails, Carla decides to kill Jackie.

Carla prepares to kill Jackie, while Cullowski absorbs human souls from Sara. In the last second, Jackie manages to disarm Carla and then takes her as a hostage. With the help of the Darklings he transports himself and Carla through shadows into lower sewers. Jackie reveals that they couldn't this before. Carla then knocks him on the ground and the two wrestle below water with Jackie defeating her. Much to Carla's shock, Jackie let her go and apologizes for killing her fiancee, Todd. Jackie then leaves, but not before throwing Carla's knife back at her. Carla doesn't pursue him and decides to go back and save Sara.

She sneaks up on Cullowski and shoots him, but he quickly recovers and mocks her for bringing the end of humanity. He then knocks her out. Suddenly, Jackie appears and takes out the The Darkness part of Witchblade, letting Sara to easier control the relic. The two then team up and attack Cullowski. Together, with the help of Carla, Jackie and Sara manage to kill Cullowski. Jackie then unleashes his Darklings to kill the rest of Necrobi hiding in the sewers. Sara then brings unconscious Carla back to surface while Jackie's Darklings help the freed captives of Necrobi.

Before losing Todd, Carla was a well-rounded and fierce FBI agent; reputable both for her persistence and no-nonsense approach in dealing with terrorist suspects. However, all of this strength of character was focused by her love for Todd and the ideals that they shared together.

After Todd's murder, Carla's values and sense of self were all but destroyed. Falling into a deep depression, she wouldn't eat or bathe; lying in bed all day and not showing up for work. It wasn't until a lead on Todd's murderer - Jackie - turned up that her grief became revenge. 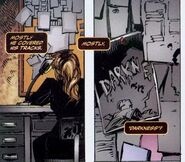 Carla meeting with The Nameless One 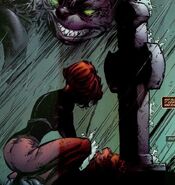 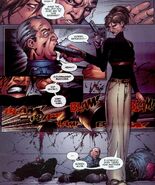 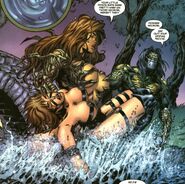 Carla saved by Sara
Add a photo to this gallery
Retrieved from "https://thedarkness.fandom.com/wiki/Carla_Denton?oldid=13164"
Community content is available under CC-BY-SA unless otherwise noted.