– Candace Cypress about the Bog. [src]

Candace Cypress is a character appearing in The Darkness comics series.

Candace is an Indian girl, living in Port Gillespie and is part of an old tribe that to which the land belongs. She worked in a boat house, which she owned. One time, Candace went into the swamp with her boyfriend. Seeing this, the Bog attacks the man. The man tries to protect the Candace, but is quickly killed by the monster. The Bog then brings crying Candace to a boat and takes her to the mainland. After this encounter, she promises herself to never enter the swamp again.

At some point, Colborne's oil company arrives at the swamp, wanting to buy the land. Colborne's henchman Deckard, offers a great sum money to Candance in order to get lease from the tribal council, but she refuses. Later Jackie Estacado, Regis Tyne and Dev Ravada arrive, claiming that they're archaeologists and wanting to investigate the ruins located in the swamp. Candace tells her encounter with the Bog and because of this refuses to return to the swamp. She expresses hostility to them, believing that they were sent by an oil company that wants to buy the swamp. Regis tries to reassure her that they're just archaeologists and have no connection to the oil company. Candace doesn't believe them and refuses to take them to a temple in the middle of the swamp. Failing to convince her, Jackie and the group leaves, but decides to secretly follow her.

During the night, Candace travels to the temple in the swamp, as two mercenaries follow her. The Bog watches them, eagerly awaiting the woman's arrival. As they reach the temple, Jackie Estacado kills the two mercenaries. Candace sees this and says that she doesn't needed protection from Jackie. At that moment, the Bog comes out of the swamp and attacks Jackie. Candace tries to stop the fight between Jackie and the Bog, but the two ignore her. Finally, the Bog overpowers Jackie and drowns him in the swamp. In order to save Jackie, Candace gets into a boat and leaves the temple, drawing the Bog away.

Candace returns to her store where Regis and Dev confront her. Regis and Dev questioned Candace as to what happened to Jackie. Candace says that the Bog drowned Jackie. They refuse to believe that Jackie is dead and insists Candace to take them to the temple. Suddenly, a grenade is thrown into the store. The group manages to evade the explosion, but Regis and Dev are knocked out. Deckard with Scab then confront Candace, saying that she should have dealt with them as they would have made her and her tribe quite wealthy.

Seeing that Candace is trying to crawl into the swamp, Deckard asks her if she trying to look for her imaginary boogeyman. Candace explains that the Bog doesn't haunt the swamp, but her, just as the Bog emerges from the water. The Bog then proceeds to attack Scab. Scab tries to shoot it, but the bullets make no impact on it. He then pulls out his sword and attacks the Bog with it. As Scab slashes the Bog, the sword gets stuck and the creature grabs the man. As last effort, Scab pulls out a grenade and sticks it into the Bog.

The explosion rips apart the Bog, while Scab losses his right arm and eye. Scab is happy about the fight, when suddenly Jackie arrives. As Scab questions who he is, Jackie slashes open his stomach. With his guts laying out in the open, Scab fall to his knees. Candace is grateful for saving her, but Jackie tells her that he saved her only for the statue. She is confused as Jackie told her that he needed the ruins. Candace then tells a pendant that bears the resemblance of the Sovereign, which she found in the ruins when she was twelve. Angry that all of this mess happened because of this pendant, Candace destroys it and tells Jackie that next time he comes for something, he should just ask.

Candace is a strong woman, that deeply cares for her tribe. Thus she refuses to sell her ancestors land even if it meant that they would become very wealthy. Because of the Bog's obsession with her, she felt some resentment towards the creature. Although she did showed concern regarding the Bog's well being when she saw the Bog being destroyed by Scab or when it fought with Jackie. 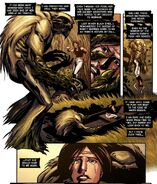 The Bog bringing Candace back to the mainland

Candace going into the swamp 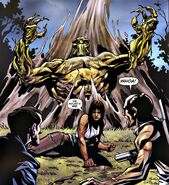 The Bog coming to Candace's rescue

Candace destroying Sovereign's pendant
Add a photo to this gallery
Retrieved from "https://thedarkness.fandom.com/wiki/Candace_Cypress?oldid=13544"
Community content is available under CC-BY-SA unless otherwise noted.