"Mourning the loss of your fathers and fearful of sharing their fates, you children have decided to cast your lot with me, an enemy of all men, knowing I will ask an unthinkable wage for my services."

– The Black Captain regarding Lodbrok asking for his aid. [src]

The Black Captain was a viking wielder of the Darkness, appearing in The Darkness: Lodbrok's Hand one-shot comic.

Not much is know about the Black Captain's early life before activating his powers. At some point after his twenty-first birthday, the Darkness awakened in him and he quickly became infamous as the enemy of all men. He also constructed a horn and would give his aid to those who sought him out, although at a price.

After Lodbrok blows the Black Horn, the Captain's ship emerged from the sea and glided silently into the fjord, where the horn was residing. The Black Captain then emerged from the ship, wanting to know as to who called him. Lodbrok proceeded to introduced himself and plead for help in defeating Grimur. The Captain, fully knowing as to what has happened them, decides to aid them, but in return he tells them, that at the completion of his task, he will take the bravest among them as his shipmate to sail with him forever. Lodbrok agreed and his comrades boarded the ship. As the Black Captain's ship sailed through the sea, Freydis noted Lodbrok that the dawn was upon them. According to her, Black Captain's ship couldn't survive in direct sunlight, which he quickly confirms. In order to avoid daylight, the ship formed a seal around itself and proceeded to go below to the darkest depths of the sea.

As they reached the shore, the Black Captain waited until sunset to march onto the Grimur's keep. Meanwhile, Freydis suggests that they should scout the keep as their observations may serve the Captain's plan of attack. As the sun finally sets, the Black Captain's army took the field. They rip apart through Grimur's army. Seeing this, Grimur ordered her slave to attack the Captain by turning herself into a giant, fire-breathing dragon. The Black Captain response by summoning his own dragon and setting it against Grimur's beast. As the beast fight against each other, Lodbrok, filled with hate and sorrow, proceeds to cut through Grimur's guards and attacks the king himself. Although Grimur threatens to kill his brother if Lodbrok's comes close to him, the young warrior ignores him and proceed to kill the mad king. With Grimur's death, his enslaved dragon gave a scream of both anger and relief before soaring away from the battlefield.

With the battle over, the Black Captain notes that neither war or victory is as it is portrayed in songs, sung in Lodbrok's fathers halls. Lodbrok then gives in to the Black Captain, prepared to pay his price and become his crewmen for life. The Black Captain then corrects Lodbrok, reminding him that he wanted the bravest one of his company to become his crewmen, which as it turns out is Freydis. The Captain tells Lodbrok, that Freydis is still alive and under his care will soon recover. Lodbrok refuses to give up Freydis to the Black Captain and proceeds to attack him. Black Captain admires Lodbrok's bravery and decides to spare him a shred of honor by cutting his arm off, so none can say he failed to give his full measure. The Captain then leaves with Freydis over his shoulder as Lodbrok screams of pain and anger followed them.

Despite most people viewing him as the enemy of all men, the Black Captain would aid others who sought him out, although at a price. He admired bravery the most and would take those who were the bravest with him after completing his task as his shipmate. The Captain was also honorable and not only kept his end of the bargain in helping to overthrow Grimur, but also left Lodbrok alive after the latter tried to stop him from taking his sister with himself.

"The sun chases me across the sea, her light melting the fruits of my labor into nothing more than a forgotten dream."

– The Black Captain regarding his powers and sunlight. [src] 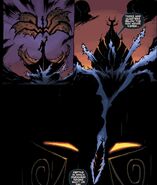 Black Captain resting on his throne. 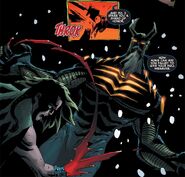 Black Captain cutting off Lodbrok's arm.
Add a photo to this gallery
Retrieved from "https://thedarkness.fandom.com/wiki/Black_Captain?oldid=18868"
Community content is available under CC-BY-SA unless otherwise noted.