"I'm no whore! And you are not my mother! You will not beat me again!"

The tavern girl Bernadette was a young orphan woman working as a servant in a small town in La Mancha during the 1400's. During one of her shifts, she met the drifting gypsy boy Michaelangelo Estacado. So smitten with him, they made love in the bed of her mistress's late husband.

When her employer caught them in the act, Michaelangelo quickly fled the tavern, abandoning Bernadette to be publicly beaten and scolded by her irate mistress; even dragging her outside. This abuse was swiftly ended by Miguel De Cervantes, giving Bernadette enough time to escape.

As the Inquisition pillaged its way into La Mancha, Bernadette was captured by one of their soldiers and interrogated as to the whereabouts of Michaelangelo. Fearful for her life, she told the soldier all she knew of Estacado. Despite her cooperation, she was burned as a heathen.

Tales of the Darkness Edit 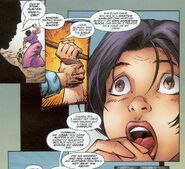 Bernadette attacked by her mistress 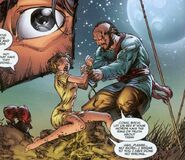 Bernadette taken by Inquisition
Add a photo to this gallery
Retrieved from "https://thedarkness.fandom.com/wiki/Bernadette?oldid=13852"
Community content is available under CC-BY-SA unless otherwise noted.