Berlin is the capital of Germany appearing in The Darkness comic series.

The Spear of Destiny Edit

After the Spear of Destiny was acquired by Adolf Hitler, Vatican sent Magdalena Victoria to retrieve it. In April 13, 1945, Victoria travelled to Berlin and attacked Nazis headquarters. After killing numerous defending Nazis, she confronts Adolf Hitler himself. By using The Light of The Magdalene, Victoria makes Hitler to see all the horrors he has done. As Hitler lies subdued, Victoria spares him, takes the spear and leaves. That day Hitler takes his own life. 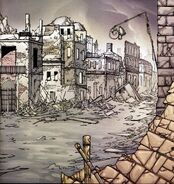 Berlin in 1945
Add a photo to this gallery
Retrieved from "https://thedarkness.fandom.com/wiki/Berlin?oldid=10733"
Community content is available under CC-BY-SA unless otherwise noted.