"Maybe the ultimate solution is the simplest. Maybe the only thing needed to extinguish darkness, is a single source of light."

Batman is a fictional DC Comics superhero appearing in The Darkness crossover The Darkness\Batman.

Bruce Wayne was born in Gotham City to Thomas and Martha Wayne who were Gotham's wealthiest and kindest citizens who hired Alfred as a care taker and friend for Bruce but one day Bruce fell into a cave of bats causing him to have a fear of the flying mammals and one night while returning from the theatre his parents were shot in front of him by a mugger named Joe Chill. This left Bruce devastated and Alfred took the boy in and raised Bruce as if he were his own son.

Bruce traveled around the world learning various martial arts and skills. He returned to save Gotham city from the corrupt and wealthy. He took the guise of a Bat becoming the Dark Knight, Batman. Bruce eventually took a Orphan circus performer whose parents were killed in accident that was later revealed to be rigged by mobsters who believed the circus owed them money) under his wing named Dick Grayson who would become Robin and later Nightwing.

Bruce would later take in another orphan boy named Jason Todd who he trained to be Robin but Jason was killed by the Joker. Bruce become isolated and violent for a while until Alfred took in yet another orphan boy named Tim Drake who Bruce raised as his son. Tim would also become Robin.Batman has many enemies such as The Penguin, The Riddler, Catwoman (Who he is also romantically involved with.), Two Face, Ra's Al Ghul, Deathstroke, Killer Croc, Mr.Freeze, Posion Ivy, Bane but his arch enemy is the Joker a mysterious clowned themed criminal under the guise of the red hood who Bruce accidentally allowed to fall into a chemical vat.

A series of crimes have been committed in Gotham City. The investigations of Batman, lead him to the author. None other than The Darkness host, Jackie Estacado. Batman breaks into Frankie's Franchetti's suite at Gotham Towers where he's confronted by Jackie. Overwhelmed by Darklings, Batman jumps through the window and escapes.

Later, Alfred stitches up Bruce wounds after the fight with Jackie. He says that both him and Jackie are very similar to each other much to Batmans objections. Later that day, Batman stops Frankie from killing Jenny Romano at the police precinct only for Jackie to attack him. In the ensuing fight, Frankie throws Jenny of the roof, but Batman manages to catch her with Darklings catching him. Batman then watches as Jackie leaves Gotham.

While not appearing physically in the comic, Jackie's past encounter with the Dark Knight is mentioned by him.

Batman loves to scare criminals and help innocents. Batman isn't a traditional superhero where as most heroes would barely injure their foes Batman has broken bones and interrogated criminals to get information. However he doesn't kill as not only believes it is wrong but that he would be no better than the man who killed his parents or the criminals he fights. Bruce seems to dedicate his life as Batman and is selfless, heroic and honourable knowing that there are certain boundaries. He does care for Dick Grayson and Tim Drake and feels guilty about Jason Todd seeing them as his sons.

Batman has no known superhuman powers however he is considered at the peak of human potential both physical and mental conditioning. 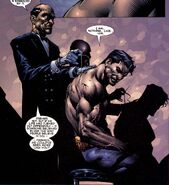 Batmobile
Add a photo to this gallery
Retrieved from "https://thedarkness.fandom.com/wiki/Batman?oldid=15641"
Community content is available under CC-BY-SA unless otherwise noted.