"There are powers on this Earth that have been with us forever. No one knows if they come from other worlds, or perhaps were handed down by gods - but each requires a human wielder, that their power might be exploited."

An Artifact is one of thirteen distinct instruments of power which are known collectively as the Thirteen Artifacts. Alone, each Artifact possesses immense potential; together, they can influence the fate of the cosmos. A few are living beings, the rest are merely magical relics.

The wielders of the Thirteen Artifacts. 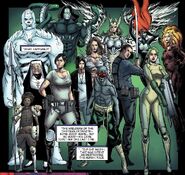 Artifact wielders in alternate future.
Add a photo to this gallery
Retrieved from "https://thedarkness.fandom.com/wiki/Artifact?oldid=20616"
Community content is available under CC-BY-SA unless otherwise noted.