"I am bred for war and combat. I am the best of the IXs. The strongest."

Ares IX is a melee class cyborg and one of nine IX models. Receiving strange visions of him wielding great power, Ares travels to Sierra Muñoz and discovers his destiny.

During the day of ascension, a group of cyborgs led by Ares IX, encounter the Darkness. With the help of their shuttle, they manage to drive it off, believing it to be just another mutant. The creature looks familiar to Ares and he recalls his childhood. He sees a vision of himself, using the Darkness to kill a woman. A spectre of young woman looms over him, which is content with his action. She then asks him to imagine, what else he could do if he claimed this power for himself. Ares then sees an abandoned church and himself, enveloped in Darkness armor.

As the vision ends, startled Ares wakes up in shuttle. Noticing this, the other models asks if he's alright. Ares answers, that he's fine. These visions have beckoned him every day for months. Eventually he got tired of them and decided to find out why is he seeing them, fearing that these distractions will make him weak. This leads him to Sierra Muñoz, a once prospect Central American country, which now was completely abandoned. As they touch down, Ares decides to go into the church, seen in his visions, completely alone. His teammates aren't happy with this, but Ares is adamant in his decision, believing that other cyborgs like Poseidon or Athena wouldn't require help either.

When Ares enter the church, he witnesses the building still bearing the constructions made out of the Darkness. He questions as to why he's here and he gets an answer. The spectre of the woman seen in his visions, calls him to see something in the cellar. Fully understanding that this is a trap, Ares goes down in the cellar to meet his fate. There he finds the spectre herself. He asks her directly as to why she brought him here. The spectre answers in riddles, saying that she wanted to show him the truth. Not satisfied with this answer, Ares opens fire on her. Unfortunately, the bullets only fly through her. The spectre explains, that his weapons won't work on her, as she's not really here. Long ago a fragment of her was left behind in his mind by her true self, back in the lab. Since then, the spectre was with Ares ever since. She knows all his aspirations, fears and what he's meant to be.The spectre then disappears.

Not understanding what the spectre has done to him, Ares begins to chase after. This leads him to a wide empty room. The spectre then tells, Ares that the truth is, he's been played for a fool just like her. Ares is confused as to who else got played and then a giant half-spider Elle jumps from the ceiling on top of him. Pinned to the ground, spectre express her hope, that she wasn't wrong about him. Ares then reaches for his sword and cuts off a pair of Spider-Elle legs. Spider-Elle then throws Ares like a ragdoll to the ground. Ares is shocked by the strength the creature possess as it is much stronger than his own siblings. Yet again, Spider-Elle manages to pin Ares to the ground and starts choking him. Ares counter-attacks by headbutting Spider-Elle and breaking her nose. He then gets up and quickly runs to his sword.

Now armed, Ares attacks Spider-Elle, but she proves to be too much for him. She then uses one of her legs to pierce Ares shoulder and toss him into a column. The spectre takes the chance to mock Ares, saying that all his training was not to make him stronger, but to make him a pawn. He was just another experiment in his mother's quest to live forever just like Elle once was too. Spider-Elle then charges at Ares, but he dodges out of the way in time, causing her to hit the column and severely weaken it. As Spider-Elle walks to Ares in order to finish him, the column breaks apart and falls on her, crushing her immediately.

With Spider-Elle dead, Ares asks the spectre as to how he could become stronger. The spectre explains, that the power who birthed both her and Elle will come to him, in time. Once it comes, Ares will have a choice. He either can submit to the role the chairwoman intended for him, remaining a pawn just like Elle or use that power for himself, becoming a God and restore the natural order of the world. With this information, Ares gets out of the church and leaves with his teammates. On the shuttle, Ares imagines the chaos and destruction he could cause with the power of the Darkness.

Ares is pushed forward by battle and war. He's only desire in life is to prove his superiority over his brothers and sisters. 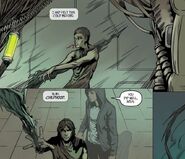 Ares using the Darkness for the first time to kill someone. 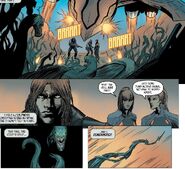 Ares waking up in a shuttle. 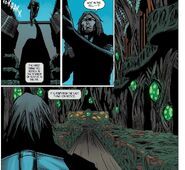 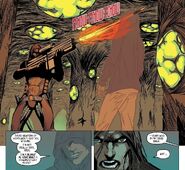 Ares opening fire on the spectre.

Ares attacked by the Spider-Elle 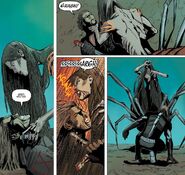 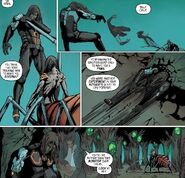 Ares tossed around by the Spider-Elle. 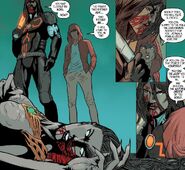 Ares standing over the corpse of Spider-Elle. 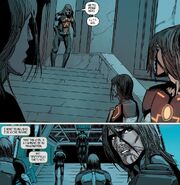 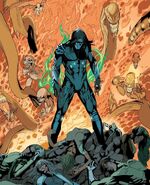 Ares imagining what he could achieve with the power of the Darkness.
Add a photo to this gallery
Retrieved from "https://thedarkness.fandom.com/wiki/Ares_IX?oldid=19734"
Community content is available under CC-BY-SA unless otherwise noted.