Antonio Estacado built a settlement on the ancient Native American Indian land of Wyrmwood. Antonio was planning to release the Darkness here in order to get rid of it. Differently from other hosts, Antonio didn't learned how to control his power and once released, the Darkness slaughtered everyone in Wyrmwood. Antonio then left the town, but the Darkness left a small part in Wyrmwood, causing all the denizens to be immortal, but also bind them to the town, never able to leave its premise.

Antonio was described by Jedidiah as a coward and weak willed person who not only fails to learn how to take control of his power, but also develops a fear for it.

Antonio killing Wyrmwood denizens under the control of The Darkness. 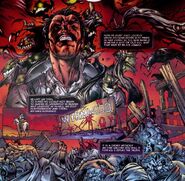 Antonio leaving Wyrmwood.
Add a photo to this gallery
Retrieved from "https://thedarkness.fandom.com/wiki/Antonio_Estacado?oldid=18384"
Community content is available under CC-BY-SA unless otherwise noted.