"The Cuban?! Jackie... You know I'd never betray the Franchetti family."

Anthony is a character appearing in The Darkness comics series.

Anthony worked for Franchetti Mafia for unspecified amount of time in Atlantic City. He then married and had a child. At some point Anthony decides to give in the Cubans to the police.

Jackie Estacado visits Anthony after he finds what the latter did. As Jackie pulls a gun on Anthony saying that he knows what he did, his wife with kid return home. She throws her grocery bag at Jackie so Anthony could escape. As Anthony runs away with his child in his hands, he turns the lights off much to Jackie's horror. The Darkness quickly kills both Anthony.

Anthony seemed sloppy and lazy. Whatever out of his conscious or other reasons he gives in the Cubans to police.

Anthony running with his son 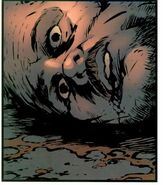 Anthony's corpse
Add a photo to this gallery
Retrieved from "https://thedarkness.fandom.com/wiki/Anthony?oldid=16961"
Community content is available under CC-BY-SA unless otherwise noted.