"I will remake this world to my design, until all is light and law and love for ever after."

– Angelus to Jackie and Sonatine. [src]

The Angelus is one of the two primal forces of the universe and is the embodiment and ruler of the Light. She has been at war with her equal and opposite, The Darkness, since the Creation. At some point she and The Darkness forged a truce to avert mutual destruction and in doing so conceived The Witchblade.

Each generation, The Angelus takes a human host, though such hosts have always been little more than puppets to the will of The Angelus.

Since the beginning of the universe, The Angelus has been at war with The Darkness. In order to avert mutual destruction, a truce was struck. A peace was given from in the offspring of The Darkness, The Witchblade.

During her many lifetimes on Earth she has been called many names. In the East, she is the Japanese Sun goddess Amaterasu-O-Mi-Kami. She is a part of the Japanese myth cycle and also a major deity of the Shinto religion. She is the goddess of the Sun, but also of the universe. The name Amaterasu derived from Amateru, meaning "Shining in Heaven". The meaning of her whole name, Amaterasu-O-Mi-Kami, is "the great August Kami (God) who shines in the Heaven". The Emperor of Japan is said to be her direct descendant.

In The West, she is called Angelus, Queen of the Light. In the heart of the Amazon Rain forest, she is Illa, Bride of Inti, god of the Sun.

Throughout her time on Earth, The Angelus has been responsible for many historic an even Biblical events and disasters, all in her struggles with The Darkness down through the centuries:

Like the Darkness, the Angelus replaces the soul of a host (which can only be a female) in order to carry out her life's mission on Earth. However, unlike The Darkness who is passed down generation to generation, The Angelus searches for the next host after they die. Her main goal is to rid the world of evil and the Darkness regardless of mortal rule or law. This has put her at odds with the current Darkness host, Jackie Estacado. Eventually the Angelus was defeated by Jackie, and was hostless for some time until Sonatine summoned her and tried to convince the entity to join with Appolonia Franchetti. Because Appolonia desired the entity too much, the Angelus chose her catatonic mother, Lauren Franchetti, instead. Soon after, the newly reborn Angelus was fooled into thinking she had finally killed the Darkness after Jackie made a copy of himself.

She soon fled with Appolonia to an ancient temple in the Amazon rainforest, where Lauren gave herself completely to the Angelus entity. The Angelus came in contact with the Magdalena, Sister Mariella. The Magdalena was seeking to reforge the Spear of Destiny, which had been shattered during her first encounter with the Darkness. The fight ended with no clear winner, but the Angelus ordered Appolonia to leave because she was touched too deeply by the Darkness and that should they meet again, she would kill her.

The Angelus would once again attempt to kill the Darkness and would also come into conflict with the new Magdalena, Patience. During the fight, Appolonia ran the Angelus through with the Spear of Destiny. The Angelus temporarily takes possession of Patience, but the spirit is forced out of Patience's body by her strong will and benevolence.

During the time the Angelus was without a host, her followers sensed that the balance between the light and the dark has been tipped in favor of Jackie Estacado, and had begun preparing for war while the Angelus searched for a new host. She first takes possession of Velocity but is forced out by members of Cyberforce. She then takes possession of convicted murderer Celestine. Shortly after the birth of Hope Pezzini (daughter to Sara Pezzini and Jackie), the Angelus claims her only to have a mystical explosion occur. After the event, only the Angelus and her foes remain. Celestine and the Angelus co-existed as separate entities, with Celestine able to become the Angelus as needed but retaining her own free will. Celestine, however, knew that the Angelus did have the ability to subsume her will at any point, but the Angelus chose not to after her encounter with Sara Pezzini's daughter.

Celestine later returned to fight Jackie Estacado. While caught in the middle of a fight between the hosts of the Glacier Stone and Ember Stone, Celestine is decapitated with the Blood Sword wielded by Jackie Estacado.

The Angelus was once again without a bearer until she came across Finch, friend of Danielle Baptiste, and possesses her. During a fight with Sara Pezzini (currently hosting the Darkness portion of the Witchblade and corrupted by it), she attempts to kill the bearer of the Angelus portion of The Witchblade, Dani. After emerging victorious (or so she believed), she absorbed the remaining half of the Witchblade into her being while still being corrupted. Sara was on the brink of killing Dani when an Angelus-infested Finch swoops in to save Dani from death, and the Angelus transfers hosts from Finch to Dani. Strangely, however, Dani is able to resist the Angelus' possessive personality, and instead of killing Sara, she is able to use the powers of the Angelus to purify Sara of the corrupting forces of Darkness. The fact that the Angelus would allow Dani to retain her free will caused come unrest among her followers, particularly her lieutenant, Sabine, who desired for the Angelus to choose her as host.

Sabine later attempted a coup to overthrow Dani and become the new Angelus host. After acquiring the Wheel of Shadows, one of the other 13 Artifacts, Sabine battled Dani, but was defeated. Later, Dani united with other Artifact bearers to combat the Survivor to prevent him from gathering the 13 Artifacts and ending the universe. They failed, but Jackie Estacado gained the ability to restart the universe and took the opportunity to make a few changes.

Following the reboot, Dani was no longer the Angelus. Instead, the Angelus force had been divided and possessed the various Angelus Warriors, creating a hive mind. The Angelus soon regained its faculties, choosing a new host in Finch, and starting the war with the Darkness anew. While the Angelus takes full control of Finch during battles, it seems to allow her some independence.

"The cursed Angelus is an agent of tyrannical law and order."

Angelus is a malevolent being that's sole purpose is to kill The Darkness by any means. After fulfilling this purpose, Angelus wants to rule the world and enforce a totalitarian order. She doesn't feel empathy for any life except for her Familiars.

Angelus fears being controlled, which is hinted to be the reason for her hate towards the Darkness. When Angelus felt Patience fighting back and taking control of her, she left Magdalena's body, shouting that nobody will control her.

She often creates human female constructs to have pleasure with them.

The Angelus is the embodiment of light and totalitarian order. As such, she possesses many supernatural godlike powers even under dark conditions. The exact ferocity of her power and beauty remains unknown, though she has been described as being as beautiful as the Morningstar and more violent and bloodthirsty than Kali.

Despite her divine powers, The Angelus does have weaknesses. 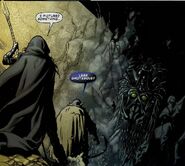 Angelus sarcophagus in the alternate future.
Add a photo to this gallery
Retrieved from "https://thedarkness.fandom.com/wiki/Angelus_(Comics)?oldid=19535"
Community content is available under CC-BY-SA unless otherwise noted.