Agnes is a character appearing in The Darkness comic series.

Agnes was thrown from her home at young age by her dad. She was old enough to look for herself and Agnes quickly the harsh reality of being in the street. In order gain money, she becomes a prostitute.

One night Agnes worked on the street and meets with Isaac who she resents for being a religious fanatic. When Jackie Estacado walks by her, Agnes offers a discount for him, but the latter rejects it as he need to meet an old friend. As she takes a bus, Isaac decides to join her and try to convince her to change her's lifestyle.

Isaac tries to convince Agnes to start believing in God and forget her dark path. Agnes rejects Isaac's offer. At that moment Jackie and Mariella fall on the street in front of the bus. The bus loses control and crashes into the two through a toy shop.

After ambulance arrives and takes Agnes to tend her wounds, Isaac insists in going with her.

In the Hospital Edit

After Agnes is check for any injuries, she let out of the hospital. Isaac reveals to her, that during the bush crash he found and took the Spear of Destiny. The spear starts to glow and Isaac decides to leave in the hospital where it do more good. Isaac then go together with Agnes to her apartment. After Isaac goes into Agnes apartment, it's implied she tries to seduce and because of this, he kills her.

Agnes is independent woman that learned at a young age to fend for herself. Being a prostitute, she quite flirty even willing to give a discount for Jackie just because of his looks. Although at first seeing Isaac as a religious fanatic, they eventually develop a friendship between each other.

Agnes working on the street

Agnes with Isaac in the bus

Agnes taken to the hospital 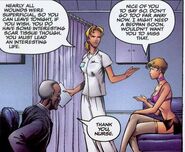 Agnes in the hospital

Agnes killed by Isaac
Add a photo to this gallery
Retrieved from "https://thedarkness.fandom.com/wiki/Agnes?oldid=13948"
Community content is available under CC-BY-SA unless otherwise noted.