– Adrienne regarding the Darkness. [src]

Adrienne Estacado is the wife of Roberto Estacado, the mother of Danny Estacado, and the grandmother of Jackie Estacado and Capris Castiglione. She is a crooked and economically powerful woman with the intent to kill Jackie on his birthday and take The Darkness for herself.

Adrienne was a thief who robbed banks to get by. She met and fell in love with Roberto Estacado. Together they would rob banks across the USA. One time an ambush by the police was set for them. Adrienne and Roberto were confronted by the police who open fired on them. As Adrienne was pregnant with Danny, The Darkness protected her, while Roberto is instantly killed.

After the birth of Danny, she searched for a way to gain The Darkness back for herself. She acquired lots of wealth and power, while waiting for Jackie to awaken his powers.

After finding out that Jackie has awaken his powers, Adrienne sent Manx to put a hundred million dollar contract to kill him until dusk. She then kidnaps Nicoletta De Vesci in order to force Cristofano De Vesci to kill Jackie.

Jackie eventually tracks her down to a suite in a Plaza hotel. Confronted, she reveals her intentions to kill Jackie and take The Darkness for herself. As the time has run out to kill Jackie, Adrienne decides to leave, but promises to come back next year. Jackie tries to kill her, but Adrienne reveals that the small part of The Darkness left in her made her immortal. Adrienne then drops Nicoletta out of her helicopter and leaves.

In her youth, Adrienne was a petty thief who stole from others and robbed banks to get by. She fell in love with Roberto and was so smitten with him that she did not consider the consequences when she and Robert made love and she became pregnant.

As an elder, she has become obsessed with possessing the Darkness, the power that saved her life. Her lust for power is such that she resorts to kidnapping and killing her own kin to achieve power.

Adrienne showed fondness for felines of any kind whatever it be a cat or a full grown tiger. She also likes leather, bondage gear and clothes that expressed sexuality as her personal bodyguards, the Freak Show were wearing it.

Adrienne with her white tiger. 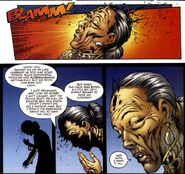 Adrienne pushing out Nicoletta out of the helicopter and then escaping.
Add a photo to this gallery
Retrieved from "https://thedarkness.fandom.com/wiki/Adrienne_Estacado?oldid=19521"
Community content is available under CC-BY-SA unless otherwise noted.